Validation errors for:
Expand all | Collapse all

Note: This list of commands is not exhaustive.
There's a more detailed and technical document available online. 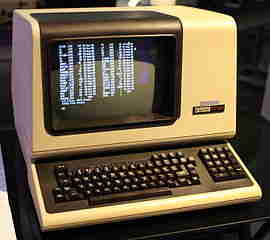 ESPTerm emulates VT102 (pictured) with some additions from later VT models and Xterm. All commonly used attributes and commands are supported. ESPTerm is capable of displaying ncurses applications such as Midnight Commander using agetty.

ESPTerm accepts UTF-8 characters received on the communication UART and displays them on the screen, interpreting some codes as Control Characters. Those are e.g. Carriage Return (13), Line Feed (10), Tab (9), Backspace (8) and Bell (7).

Escape sequences start with the control character ESC (27), followed by any number of ASCII characters forming the body of the command.

Examples on this help page use the following symbols for special characters and command types:
(spaces are for clarity only, DO NOT include them in the commands!)

There are also some other commands that don't follow the CSI, SGR or OSC pattern, such as \e7 or \e#8. A list of the most important escape sequences is presented in the following sections.

The initial screen size, title text and button labels can be configured in Terminal Settings.

Screen updates are sent to the browser through a WebSocket after some time of inactivity on the communication UART (called "Redraw Delay"). After an update is sent, at least a time of "Redraw Cooldown" must elapse before the next update can be sent. Those delays are used is to avoid burdening the server with tiny updates during a large screen repaint. If you experience issues (broken image due to dropped bytes), try adjusting those config options. It may also be useful to try different baud rates.

ESPTerm supports all UTF-8 characters, but to reduce the screen buffer RAM size, only a small amount of unique multi-byte characters can be used at the same time (up to 160, depending on compile flags). Unique multi-byte characters are stored in a look-up table and are removed when they are no longer used on the screen. In rare cases it can happen that a character stays in the table after no longer being used (this can be noticed when the table fills up and new characters are not shown correctly). This is fixed by clearing the screen (\e[2J or \ec).

The user can input text using their keyboard, or on Android, using the on-screen keyboard which is open using a button beneath the screen. Supported are all printable characters, as well as many control keys, such as arrows, Ctrl+letters and function keys. Sequences sent by function keys are based on VT102 and Xterm.

The codes sent by Home, End, F1-F4 and cursor keys are affected by various keyboard modes (Application Cursor Keys, Application Numpad Mode, SS3 Fn Keys Mode). Some can be set in the Terminal Settings, others via commands.

Here are some examples of control key codes:

The blue buttons under the screen send ASCII codes 1, 2, 3, 4, 5, which incidentally correspond to Ctrl+A,B,C,D,E. This choice was made to make button press parsing as simple as possible.

ESPTerm implements standard mouse tracking modes based on Xterm. Mouse tracking can be used to implement powerful user interactions such as on-screen buttons, draggable sliders or dials, menus etc. ESPTerm's mouse tracking was tested using VTTest and should be compatible with all terminal applications that request mouse tracking.

Mouse can be tracked in different ways; some are easier to parse, others more powerful. The coordinates can also be encoded in different ways. All mouse tracking options are set using option commands: CSI ? n h to enable, CSI ? n l to disable option n.

All tracking modes produce three numbers which are then encoded and send to the application. First is the event number N, then the X and Y coordinates, 1-based.

Mouse buttons are numbered: 1=left, 2=middle, 3=right. Wheel works as two buttons (4 and 5) which generate only press events (no release).

The following encoding schemes can be used with any of the tracking modes (except Focus tracking, which is not affected).

ESPTerm implements Alternate Character Sets as a way to print box drawing characters and special symbols. A character set can change what each received ASCII character is printed as on the screen (eg. "{" is "π" in codepage 0). The implementation is based on the original VT devices.

Since ESPTerm also supports UTF-8, this feature is the most useful for applications which can't print UTF-8 or already use alternate character sets for historical reasons.

All codepages use codes 32-127, 32 being space. A character with no entry in the active codepage stays unchanged.

There are two character set slots, G0 and G1. Those slots are selected as active using ASCII codes Shift In and Shift Out (those originally served for shifting a red-black typewriter tape). Often only G0 is used for simplicity.

Each slot (G0 and G1) can have a different codepage assigned. G0 and G1 and the active slot number are saved and restored with the cursor and cleared with a screen reset (\ec).

The following commands are used:

All text attributes are set using SGR commands like \e[1;4m, with up to 10 numbers separated by semicolons. To restore all attributes to their default states, use SGR 0: \e[0m or \e[m.

Those are the supported text attributes SGR codes:

Colors are set using SGR commands (like \e[30;47m). The following tables list the SGR codes to use. Selected colors are used for any new text entered, as well as for empty space when using clearing commands (except screen reset \ec, which first clears all style attriutes. The configured default colors can be restored using SGR 39 for foreground and SGR 49 for background.

The actual color representation of the basic 16 colors depends on a color theme which can be selected in Terminal Settings.

The coordinates are 1-based, origin is top left. The cursor can move within the entire screen, or in the active Scrolling Region if Origin Mode is enabled.

After writing a character, the cursor advances to the right. If it has reached the end of the row, it stays on the same line, but writing the next character makes it jump to the start of the next line first, scrolling up if needed. If Auto-wrap mode is disabled, the cursor never wraps or scrolls the screen.

Legend: Italic letters such as n are ASCII numbers that serve as arguments, separated with a semicolon. If an argument is left out, it's treated as 0 or 1, depending on what makes sense for the command.

Legend: Italic letters such as n are ASCII numbers that serve as arguments, separated with a semicolon. If an argument is left out, it's treated as 0 or 1, depending on what makes sense for the command.

ESPTerm implements commands for device-to-device messaging and for requesting external servers. This can be used e.g. for remote control, status reporting or data upload / download.

Networking commands use the format \e^...\a, a Privacy Message (PM). PM is similar to OSC, which uses ] in place of ^. The PM payload (text between \e^ and \a) must be shorter than 256 bytes, and should not contain any control characters (ASCII < 32).

To send a message to another ESPTerm module, use: \e^M;DestIP;message\a.

This command sends a POST request to http://<DestIP>/api/v1/msg. The IP address may be appended by a port, if needed (eg. :8080). In addition to POST, a GET request can also be used. In that case, any GET arguments (/api/v1/msg?arguments) will be used instead of the request body. This is intended for external access when sending POST requests is not convenient.

Each ESPTerm listens for such requests and relays them to UART: \e^m;SrcIP;L=length;message\a, with length being the byte length of message, as ASCII.

Notice a pattern with the first letter: capital is always a command, lower case a response. This is followed with the HTTP commands and any networking commands added in the future.

To request an external server, use \e^H;method;options;url\nbody\a.

The response has the following format: \e^h;status;options;response\a

It's possible to dynamically change the screen title text and action button labels. Setting an empty label to a button makes it look disabled. The buttons send ASCII 1-5 when clicked. Those changes are not retained after restart.

ESPTerm provides a simple API to remotely control and read GPIO pins GPIO2, GPIO4, and GPIO5. The main use of this API is to remotely reset a device that communicates with ESPTerm through the UART.

GPIO2 is normally used for debug UART, so when used as GPIO, debug logging is disabled. You can configure the pin functions in System Settings.

The GPIO control endpoint is /api/v1/gpio, with optional GET arguments:

The GPIO endpoint always returns a JSON object like this: {"io2":0,"io4":1,"io5":0}, showing the current input levels. Input reading works always, regardless of the GPIO settings.